England nonchalantly completed a record chase of 378 to beat India in rapid time on the final morning of the fifth Test at Edgbaston.

Centuries from Joe Root and Jonny Bairstow took England to their highest successful pursuit in Test cricket and the ninth-largest in the history of the game.

Needing another 119 from their overnight 259-3, Root and Bairstow coasted with incredible ease, taking England to a memorable seven-wicket win, one of their all-time greatest victories.

Bairstow’s 114 not out was his second century of the match, while Root ended unbeaten on 142 in an unbroken partnership of 269.

They carried England to a new height in what is turning into a spectacular summer under new captain Ben Stokes and coach Brendon McCullum.

The win ensures a series that was postponed last summer is drawn 2-2 but, more importantly, it is the greatest validation to date of England’s ultra-positive approach to Test cricket.

Their next series is with South Africa in August, while an entirely different squad under new white-ball captain Jos Buttler plays the first of three T20s against India on Thursday.

Just five weeks ago, England’s Test cricket was in the doldrums, with McCullum and Stokes given the task of reviving a team that had won only once in 17 attempts.

While the manner of the 3-0 series win over New Zealand was thrilling, it felt like a different prospect to play ‘Bazball’ against the powerful Indians.

The home side were under huge pressure at different times during this match. They were 83-5 in response to India’s first-innings 416, then on Monday India were 322 ahead with five second-innings wickets in hand.

And yet, England’s insistence that they could chase any target was proved correct, thanks largely to the cavalier progress they made on a scintillating fourth afternoon.

Strangely, given the magnitude of the result, the fifth morning was almost anticlimactic.

Edgbaston was far from full despite all of the available free tickets being taken, while Root and Bairstow removed what little jeopardy remained in the chase.

That takes nothing away from what England have accomplished – to overhaul 378 for the loss of only three wickets is truly remarkable.

What can this new England go on to achieve?

Superlatives for England’s pair of Yorkshire batting maestros have long been exhausted. This was Bairstow’s fourth hundred in five innings and sixth this year, Root has made 11 since the beginning of 2021.

Their rebuild from 109-3 on Monday ran India ragged. When Root resumed on 76 and Bairstow 72 on Tuesday morning, India still had fielders scattered, allowing runs to flow.

Root played dreamy drives and clips off the pads. After he had run Mohammed Siraj to third man for his 28th Test ton, he unfurled the trick shots. Shardul Thakur was belted back over his head for four, then reverse-scooped for six.

Bairstow was more circumspect, but still pummelled anything short. He only showed nerves on 99, going to three figures with a pinched single off Ravindra Jadeja and celebrating with an emotional embrace from Root.

By the end, their partnership was the fourth-highest by any pair in the fourth innings of a Test, while the run chase surpassed the previous England record of 359, set when Stokes stunned Australia at Headingley in 2019.

Victory, a formality for most of the morning, was completed almost half an hour before lunch.

This is a crushing defeat for India. Last summer they were by far the superior team, but they called off the fifth Test after a Covid outbreak in their backroom staff and have now missed out on a first series win in England since 2007.

Not only that, but this is the largest target they have failed to defend in Test cricket.

They made a selection error in omitting spinner Ravichandran Ashwin, carelessly threw away a dominant position when they were batting in their second innings, then were completely passive as England overwhelmed them in the run chase.

Might the tourists have avoided the mistakes had Jasprit Bumrah not had to stand in for captain Rohit Sharma, who was ruled out with Covid?

Realistically, the way England played, nothing would have stopped them. 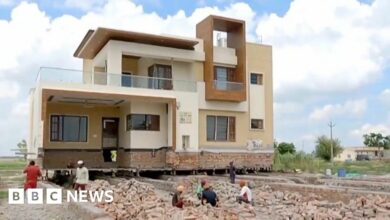 India farmer moves two-storey home – an inch at a time 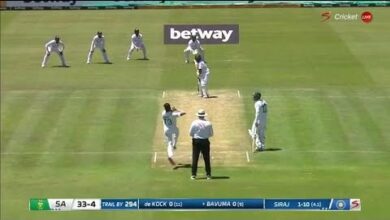