Spanish teenager Carlos Alcaraz reached his first major semi-final after beating Italy’s Jannik Sinner in a US Open thriller which ended at a record latest time of 2.50am in New York.

The third seed will face Frances Tiafoe on Friday for a spot in Sunday’s final.

“I still don’t know how I did it. The level I played, high quality of tennis. It’s unbelievable,” said Alcaraz, who is the youngest man to reach a Grand Slam semi-final since Rafael Nadal at the 2005 French Open.

“I always say you have to believe in yourself all the time. Hope is the last thing you use. I believed in myself, my game.”

A first-time Grand Slam champion is already guaranteed in the men’s singles at Flushing Meadows, with Norway’s Casper Ruud and Russia’s Karen Khachanov contesting the other semi-final.

Alcaraz and 23-year-old Ruud also have a shot of becoming the new world number one as an intriguing tournament nears a conclusion.

Tiafoe gets his wish for marathon match

Tiafoe joked after his win – which finished over 10 hours before the last quarter-final finally ended on Thursday morning – he hoped the match between Sinner and Alcaraz would be a “marathon and super-long”.

His wish came true after an extraordinary night on Arthur Ashe Stadium.

Full of powerful and precise hitting, incredible shot making and jaw-dropping athleticism, the match between two of the sport’s brightest talents surpassed even the already-lofty expectations.

After missing five set points in the second set, unable to serve out the third and stopping Sinner taking a match point in the fourth, Alcaraz sealed victory after five hours and 15 minutes with his first match point.

The teenager collapsed to the court in elation, covering his face and breathing heavily as he lay down to process what had just happened.

He peeled himself off the surface to share a warm hug with Sinner, who walked around the net to congratulate his opponent.

An exhausting battle ended in front of a healthy number of dedicated fans in the early hours and Alcaraz celebrated wildly with his incredulous supporters, even giving a trainer each to two of them.

Tiafoe stunned 36-year-old Nadal in the previous round and then backed up what he called the biggest day of his life with another impressive display against Russian eighth seed Rublev.

The 22nd seed is the first American man to reach the US Open semi-finals since Andy Roddick in 2006.

“This is wild, this is crazy. I had the biggest win of my life 48 hours ago. To back it up, it’s tough to turn the page, but I did, and now I’m in the semis,” said Tiafoe.

“I feel so at home on courts like this. This court is unbelievable.

“I always find a way somehow on this court. Let’s enjoy this one, but we got two more.”

World number 11 Rublev, who has now played in six major quarter-finals without progression, looked the more dangerous in the early stages but missed chances as Tiafoe took control of the first set in the tie-break.

The second set also went all the way on serve, but if cracks were beginning to show in Rublev’s composure, they shattered in the tie-break.

A composed Tiafoe – who has not lost a tie-break so far in the tournament – dominated and Rublev’s anger boiled over as he repeatedly smashed his racquet against his own knee.

The third set brought the first break of serve, leaving Rublev in tears after he allowed Tiafoe to edge ahead for 4-3.

Tiafoe withstood pressure in the eighth game, saving two break points, then served out the match with his 18th ace to become the first black American man to reach the US Open last four since Arthur Ashe in 1972.

Ukraine’s dream of a Eurovision win

Ukraine’s dream of a Eurovision win 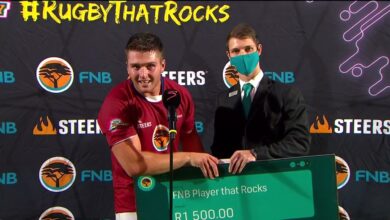 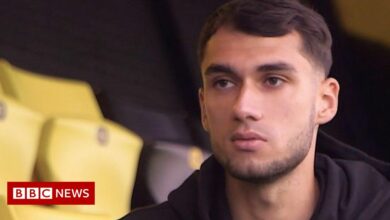 Match for Peace tour: ‘I have friends in Ukraine with guns now’